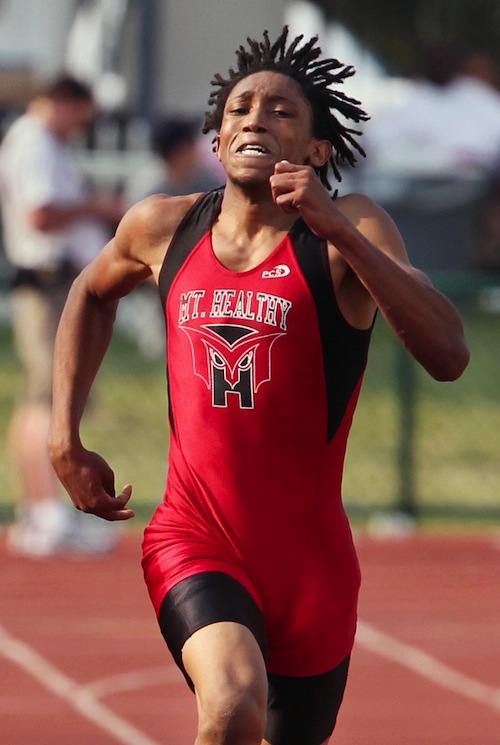 Twist a runner’s arm, and he’ll admit that racing is not fun. It hurts! Especially at shorter distances, it hurts like a crazy mofo! And if it doesn’t hurt that badly, you’re not doing it right. That’s the conclusion I’ve reached after talking with many runners of all skill levels, and analyzing over 100 of my own race performances. Being in strong physical shape is essential, but it’s not enough by itself. If you really want to excel you need guts.

What sets the upper limit on your race efforts? Do you run so hard that you puke, that you pass out? Very few of us can say we have, nor should we want to. My point isn’t that you should race until you black out, but that somewhere before the black out stage, something else steps in and slows you down. Some rational impulse says “Why am I running so hard through so much pain? It’s not really that important.” Or maybe a core bit of your brain says “Emergency! Body stress levels are critical! Shutting down…” It’s not so much that you can’t run any harder, but that you won’t.

How close to your physical limits are you willing and able to push yourself? That’s what’s called guts. For some runners, once things start to get uncomfortable, they’re not willing to run any harder. If they’re happy racing that way, that’s fine. Sometimes you’ll see such people in the later stages of a race, chatting with others around them, a clear sign that they’re comfortable. Most runners are willing to push themselves to higher levels of discomfort in order to achieve their goals. One popular mantra says “The pain is temporary, the pride is forever”. But when they’re 2 miles into a scorching 5K, and feel ready to lay down in a ditch and die, will the lure of shaving an extra 5 seconds off their finish time be enough motivation to keep up the pace?

At the elite level, the runners are experts at pushing their bodies as close as possible to their physical limits. You’ve seen the drawn, almost haunted look on their faces in the final stages of a hard race – they are suffering severely. But they’re so motivated to run their best, they’re willing to endure almost anything.

Look at this video of Kenenisa Bekele, Mo Farah, and Haile Gebrselassie at the finish of last year’s BUPA Great North Run. Look at their faces while both Bekele and Farah run sub-60 for the final 400m of a half marathon. This is what it looks like to push yourself to the utmost.

Next time you’re at a finish line, hang out and watch the other runners finishing. Look at their faces and their body language, and listen to their breathing. Do they look like they just came off a stroll in the park? Do they look like they’re about to die? Do faster runners push themselves closer to their limits than slower ones, or is there no correlation?

Personally I’m no great shakes on the racing scene, but over the years I’ve found a few things that helped me push closer to my physical limits:

Track Workouts – A series of lung-burning intervals on the track hurts like hell, but each one only lasts a few minutes, making it tolerable. This gives you a chance to get intimately familiar with that “oh my God this hurts” feeling. When it strikes again in a race it won’t hurt any less, but it’ll be a familiar hurt, and you’ll know from experience that you can endure it.

Setting Clear Goals – The middle of a race is a not a good time to wonder what the point of all this pain is. If you can’t remember why you’re pushing so hard, you won’t. Aim for a specific time goal, a new personal PR, or some qualifying standard. Put that goal in your mind during every workout and training run. Let the desire burn. When the pain comes, you’ll have a reason to push through it.

Competition – Nothing helps push you to your limits like head-to-head competition. Seek out races with an evenly-matched rival, or pick up on a stranger running just ahead of your pace. Every time you’re tempted to slack off the pace just a little bit, you’ll see his shirt recede ahead, and it’ll give you a kick in the ass to keep up.

Smile! – In the middle of a race when you feel your worst, smile! This is my single greatest trick. Some primitive part of the brain sees that you’re smiling and concludes things can’t be that bad, and suddenly you feel a little bit better. Try it!

What other methods have you found to help race close to your physical limits?