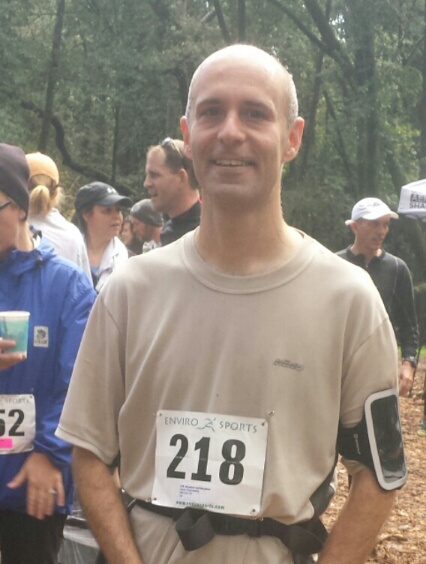 I’m back! On Saturday I ran the Envirosports King’s Mountain Half Marathon, my first race in over a year. It hurt like hell, but it was a good hurt, and after running almost zero for 2013 it was great just to be racing again. Roar!

King’s Mountain is a trail race, through a pretty redwood forest and up a mountain, then down again. Envirosports calls it a half marathon, but I think it’s more like 11.5 miles… nobody seems to know for sure. Maps don’t plot the trails very accurately, and GPS loses signals in the canyons, and it’s such a twisty hilly course that distance isn’t really the best way to gauge it anyway.

Severals days of very heavy rain drenched the area before the race, but on Saturday the weather turned milder. It sprinkled on and off throughout the race, but was warm enough and not too windy, so I didn’t mind. Footing was a challenge, however, as the days of rain left many parts of the trail a swampy mess.

I felt pretty good at the start. After two months of “get in shape” training from a zero baseline, my race plan was:

There were 118 people in the race. From the start I found myself in the lead group, running eighth. This should have told me something was wrong, because I’m not that fast, but I didn’t feel like I was pushing too hard. Maybe everyone else was just slow? But after a half mile fatigue slammed me, and I realized I’d started out going way too fast. Classic mistake, and I paid the price as at least 20 people passed me over the next half mile.

We reached the steeper section of the trail, and the climbing began in earnest. I was running with a heart rate monitor, and my HR was pushing 170. Aiyee, bad news! WAY too hard! That level of effort so early in the race was courting disaster and blow-up. Every time I saw my HR, I tried to slow down, but somehow I always just sped up again. It was like my body was determined to go too hard on the uphill and collapse at the summit, and there was nothing I could do to change it.

I mostly kept pace with the people around me, trading places with a woman in pink shoes at least 10 times. My HR was going through the roof. At 35 minutes I realized I’d forgotten the energy gel. I got it in my mouth, but had trouble swallowing, as if my need to suck lungfulls of air wouldn’t allow me to close my mouth to swallow the gel. I actually felt kind of nauseous. The climbing went on and on, an endless suffering slog of 10 minute miles. My HR kept climbing, eventually reaching 177, which is within a beat or two of my max HR and way, way, too high for this event. At 59 minutes I finally crested the summit ridge, and I thought I’d never seen a more beautiful sight. I hit the halfway aid station and was totally spent, like I was ready to stop the race right there, but I knew the downhill miles would bring me back home. Ten seconds to refill my water bottle, and I was gone.

As I began the descent, for a minute it was all I could do to gasp for air and try to recover a little, but once my HR started to come down I took off. I was positively flying downhill, which was scary as hell. I had to pass about 70 runners who were still coming uphill, squeezing past them at high speeds on a narrow trail overlooking a steep drop. And the trail was a muddy Slip-n-Slide, with sharp switchbacks threatening to shoot me into a ravine with a single misstep. Fortunately my mountain goat skills saved me and I stayed on my feet.

Even in my fatigued state, I started to pick off runners as soon as I began to descend. Many people will squeeze to the side and politely let you pass if you chase them down from behind on the trail, but some competitive types stay firmly in the middle and force you to “make a pass” by vaulting over rocks and roots at the trailside. I was stuck behind one slower runner for a minute or two, and finally cut the apex of a switchback to jump around and ahead of him. But just as I leapt, he cut the apex himself on an even tighter line, and I almost landed on him. I just managed to squeeze by safely.

With about two miles two go, I was chased down from behind by two guys who I’ll call “Camelback” and “Vibrams”. They were hardly going any faster than I was, but I just couldn’t muster the speed or the willpower to stay in front. They moved by me, and began to fade into the distance ahead. But then a moment later they took a wrong turn at a trail intersection, and by the time they realized their mistake I was a few seconds in front again.

At about one mile to go, I was determined not to let them pass me a second time, but Vibrams went by again and Camelback was tight on my heels. It was the part of the race where I should have given it my last, best effort, but I was so wiped it was hard to care anymore. My brain floated in a kind of fog, wanting only to be finished. I knew we were getting close. I managed to put a little distance on Camelback, but Vibrams crept further and further ahead. Then unexpectedly I was gaining on Vibrams! He was fading, but I was fading too. At a quarter-mile to go I was right there, two strides behind him. On another day I might have summoned the willpower to sprint him down to the finish, but this day I just didn’t have it. He was tantalizingly close, but I just couldn’t get past. Looking over my shoulder, Camelback was nowhere in sight, so I let Vibrams go and cruised to the waiting arms of the finish line.

My finish time was 1:45:33. Just after finishing, I realized I never took any of the energy gels after the first one. Doh!

Was this a good race? There’s no easy way of measuring how good or bad my finish time was, since the course was a twisty roller-coaster and I don’t even know how long it was. I finished 30th out of 118 overall, and 4th out of 12 in my division, which is respectable. Vibrams finished 16 seconds ahead of me, and Camelback was 39 seconds behind. My average HR for the race was 165, or about 92% of max HR for an hour and 45 minutes, so that’s a pretty good workout!

I wish I’d finished a bit higher than I did, but it’s still a good result for only having trained two months, and killing myself on the uphill half of the course, and not taking in the calories I’d planned. I’ll probably do some more halves this spring, then the next big test is June 8 when I’ll do my first full-length trail marathon. Woo-ee!