Combine the beauty of a trail race with the speed of a road marathon, and you get Coastal Trail Runs’ Bizz Johnson Trail Marathon: 26.2 miles of trails that are USATF certified and a Boston qualifier. The course is a rails-to-trails path with very gentle grades that a locomotive could handle, meandering through pine forests along a picturesque river. This little gem of a race happens each October in the town of Susanville, in the remote lava-sculpted lands of far north-east California, not far from Lassen Volcanic National Park.

Several friends from the SF Peninsula Trail Runners group were running Bizz Johnson, and I decided to join the fun with a comparatively last-minute signup. Coming off a base of 10 lazy miles per week, I only had 9 weeks of real marathon training before the race – about half the preparation I normally put in for a marathon (cue the ominous warning music). Despite the abbreviated training schedule, I still managed to fit two 20 milers and another fast 16 miler, peaking with a couple of 45 mile weeks. Based on those training runs, I estimated I was in shape for about a 3:45 marathon time if run at sea level on a flat course.

Three of us made the 6-hour drive up to Susanville on Saturday morning, meeting the other three there at the pre-race packet pickup. I learned there were 99 runners registered for the marathon and 26 in the 50K, with another few hundred registered for the 10K and two different half marathons. Susanville proved to be larger and more interesting than I’d expected, and a nice little jumping off spot for outdoor adventures in this remote part of the eastern Sierras. We checked in to the Super 8 motel, grabbed an early dinner at the Pioneer Saloon, and were in bed before 9PM.

Sunday morning we awoke early and drove to the Susanville train depot, where we caught the shuttle bus to the marathon start 20 miles west of town. Our bus driver made several wrong turns and we only arrived about three minutes before the 9:00 AM start, so there was no time for any lengthy pre-race preparations. The sun sparkled in a cloudless blue sky with temperatures in the 40s as the race director gave some brief final instructions. Then without further fanfare, we were off! 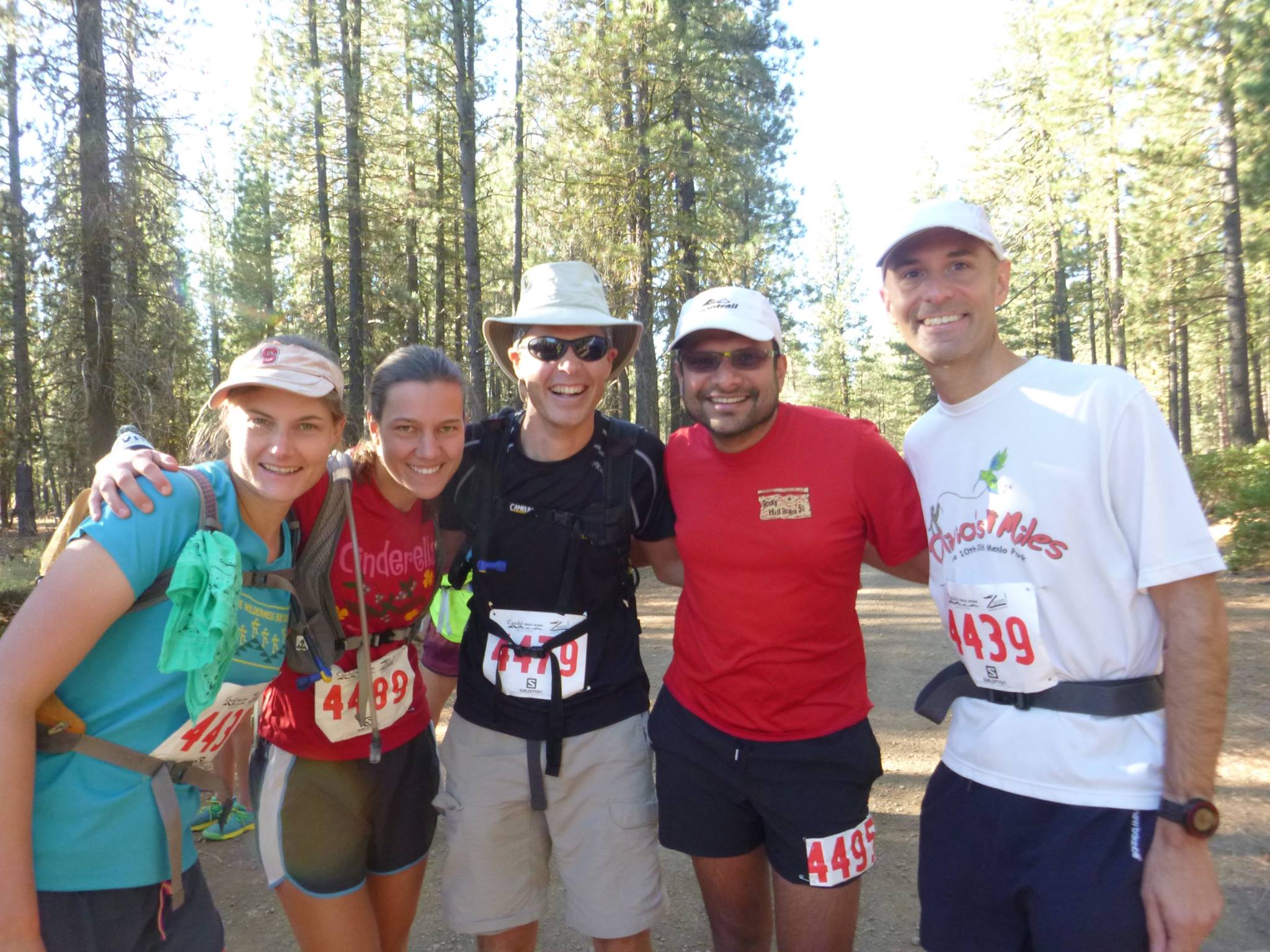 The big question was how to pace myself, and what kind of time to aim for. The course elevation profile showed a 1200 ft drop from mile 6 to the finish line, growing steeper after mile 12. With a profile like that, maybe it would be a very fast course and I could beat my 3:45 finish time estimate. The profile also appeared to virtually guarantee a negative split, with the second half of the marathon run in less time than the first. This made it perfect for the Strava Back Half Challenge, in which runners could win a free pair of New Balance shoes by running a negative split in a USATF certified marathon during fall 2016.

But the big elevation drop was only half the story. The first six miles of the course were actually uphill, and miles 6-12 were almost flat. The 5100 ft average altitude was a major factor too. While it wasn’t so high that you could really notice a difference while standing around chatting, the altitude definitely had a negative impact on race pace. After consulting a few reference sources, I decided that the course profile would likely give a 3-4 minute benefit, but the altitude would give a 10-15 minute penalty. So the whole race might be about 10 minutes slower than a flat sea-level marathon. I set my goal for a 3:50 to 3:55 finish time, and hoped for the best.

From the very start I was about 15 seconds/mile slower than I’d expected, even accounting for the altitude. Either the altitude had a bigger impact than I’d thought it would, or I just wasn’t as fit as I thought I was, but I listened to my body and simply hoped I could make up time later. The course began with a short out and back section on a fire road before officially turning onto the Bizz Johnson Trail. There was some annoying loose gravel in the early miles, but most of the trail was great for running, with about 50% in the shade and a light breeze. The race ticked along with small but cheerful aid stations every three miles. I fell in with other runners whenever I could, and tried to keep the pace conservative. I passed a few people and just rolled along, waiting for the downhill.

After mile 12 it became clear that a 1.5% grade barely counts as downhill for tired legs. Yes, the pace improved by 10 or 20 seconds per mile, but visually you could hardly discern the grade. I talked with one disgruntled runner who said it was all bullshit, and claimed you could see the course was trending uphill just by looking at it. Up or down, I kept a fairly consistent pace but still behind my 3:50 – 3:55 goal. My first half split was 2:02:13, so I needed to be faster than that for the second half to satisfy the Strava Challenge. 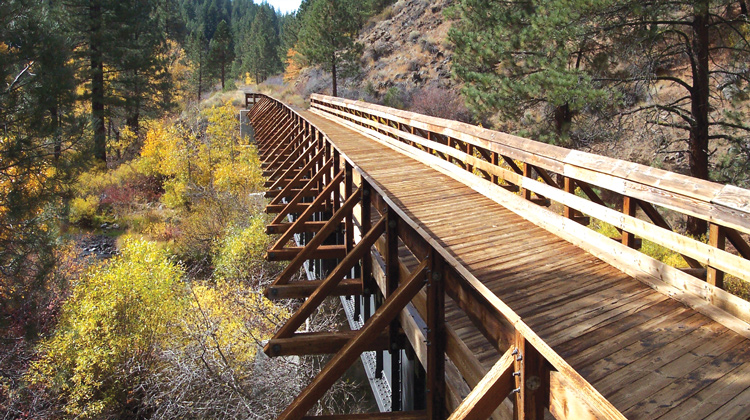 I managed to pick up the pace a little for miles 14-18, and for a while I thought sub-4:00 might still be possible. I ran in a loose group of four runners, which was pretty good considering the small field and how far we were into the race. At mile 20 we reached the only real hills on the course: a short descent down to the river level, under a freeway, then back up the slope on the other side. By this point I was starting to strain, but was still mostly holding together. I passed the other runners in our little group shortly after the 20 mile aid station, and after that I was completely alone until the finish. The good news was this was the most beautiful part of the course, right down by the river. The bad news was it was the finish of a marathon.

Ah, the final miles of a marathon… are they ever not miserable? It’s hard to avoid those thoughts of “this is stupid, why am I doing it?” I was hanging on OK through 21-22 miles, but couldn’t muster the brainpower to calculate whether a sub-4:00 were still possible. My breathing grew louder, and a snake slithered away from my approach. Then someone loaded a refrigerator onto my back, and it became obvious that sub-4:00 was out of the question. A pace that had felt manageable two miles earlier suddenly required a major effort to maintain. Two dark and spooky railroad tunnels in the final miles were a nice change, but it was so dark inside the tunnels that I was forced to slow my pace further to avoid tripping on unseen rocks.

The last two miles were tough. The temperature had climbed into the upper 70s, the shade was mostly gone, and my pace was fading further and further. I knew sub-4:00 was gone, but I really wanted to make a negative split and complete the Strava Back Half Challenge. If I could hold on to the pace for two more miles I’d have it, but if I continued to fade even a little more, it would slip out of reach.

I pumped my arms furiously while my heart jackhammered, but the pace kept creeping slower. It was going to be close. My brain was too fuzzy to do accurate math, but I decided that if I still had at least 3 minutes left at the 26 mile marker, I could still make the negative split. But when I passed the marker I saw there were only 2-something minutes left – no!!! I swore out loud and then absolutely killed myself going as hard as I could for the final 0.22, which wasn’t very fast, but felt like running through quicksand. I hit the finish line at 4:03:36, for a 50-second negative split. Mission accomplished.

After the finish I flopped down on the ground and lay there gasping for about 10 minutes. My hands and face were all numb, which was a little scary, as nothing like that had ever happened to me before. When I recovered, I learned that I’d won 2nd place in my age group, which seemed fantastic until the next day when I learned there were only 2 people in my age group. Oh well, I’ll take it anyway! 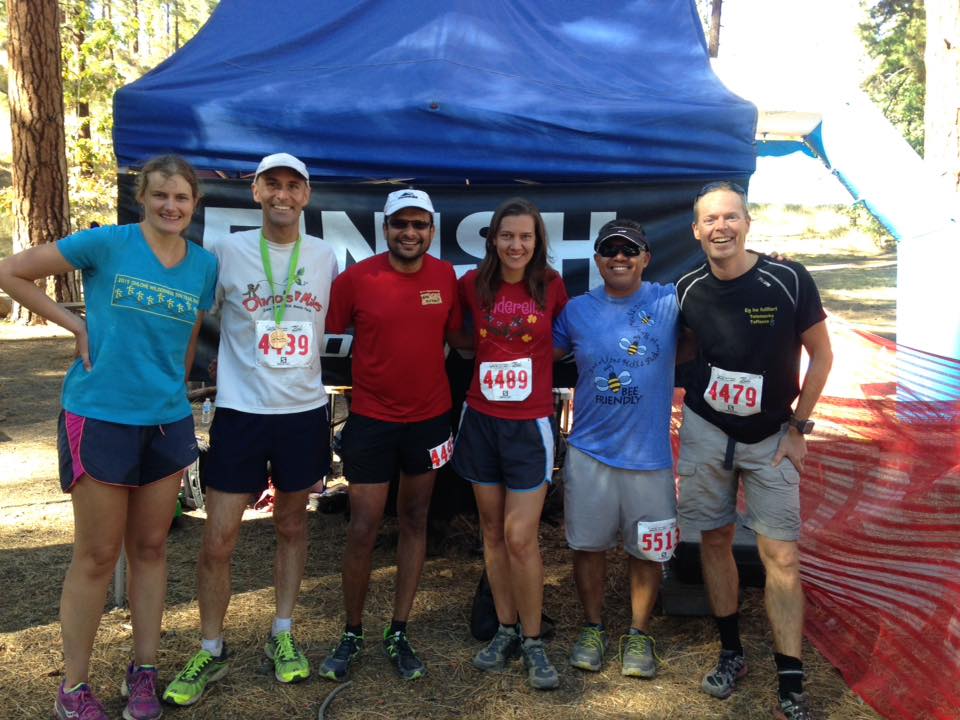 CTR put on a nice finish line barbecue, and I enjoyed the company of other sweaty and exhausted runners while waiting for the rest of the Peninsula Trail Runners to finish. Everyone did great! Among the six of us, we set four PRs and earned three medals. After finishing we soaked our tired and filthy feet in the Susan river before taking another shuttle bus back to town. Thanks Coastal! It was a great race.