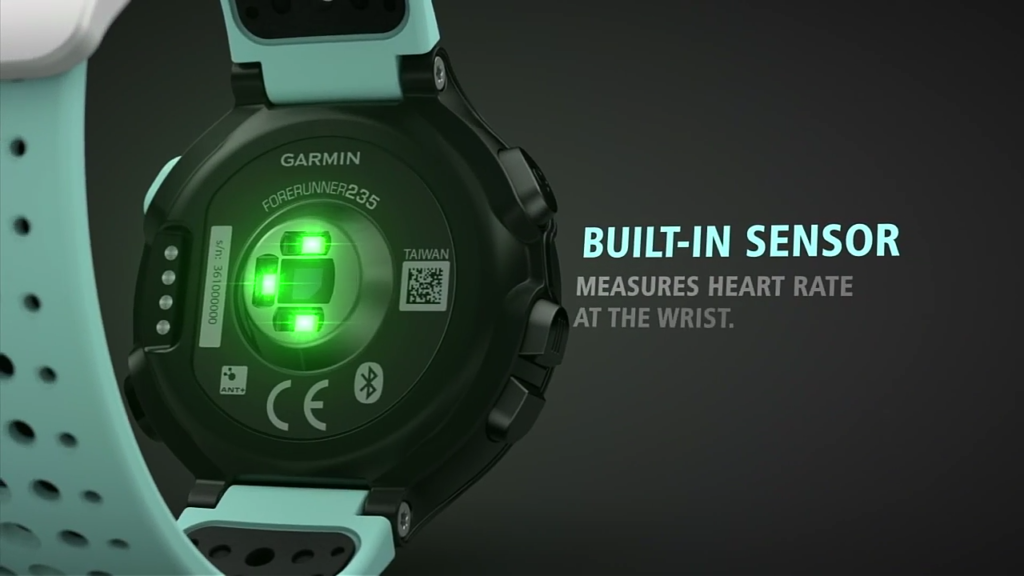 Arghh, heart rate monitors! They’re temperamental beasts that never seem to work correctly. The Garmin Forerunner 235 has a built-in optical heart rate sensor at the wrist, which promises to make HR measurements more convenient and comfortable than with the old-style chest strap. Unfortunately my testing has found the FR235’s wrist-based HR measurements to be wrong by 10-30 bpm often enough that it’s of limited use for tracking my running.

An optical HR sensor works by measuring tiny changes in the reflected light from your wrist veins with each heartbeat. It’s not quite as accurate as the electrical measurements from a chest strap, and it can sometimes be thrown off by other sources of changing light, but ideally its convenience will make up for those shortcomings. Before purchasing the FR235, I read several reviews that focused on its optical HR sensor, especially DC Rainmaker’s excellent review. The consensus was that the FR235’s optical measurements were generally within a few beats per minute of a chest strap’s measurements, especially for runs at a fairly constant effort level, which describes most of my running. The only place where the reviews identified a significant problem was when doing hard interval repeats, where the FR235 would sometimes take too long to recognize when HR had gone back down at the end of an interval.

After a few weeks of running with the FR235, I can only wish it worked half as well for me as it did for DC Rainmaker. When running intervals, it doesn’t just lag with the HR decline at the end, but typically misses the interval completely. Here’s a workout I did recently, where I inserted some short sprints at 5:30/mile pace into an easy run at 9:00/mile pace:

Five sprints are easily visible as sharp spikes in the blue pace graph. For the first and third sprints, the HR measurement from the wrist-based optical sensor barely changed at all. Looking solely at the HR data, you would never have guessed an increase in effort had occurred there. The fifth sprint showed a more gradual increase in HR accompanying a gradual increase in pace, but no HR response from the sprint itself. Only the second and fourth sprints showed a HR response more like you would expect, with a sudden increase in HR, but even there the HR didn’t spike very high. Contrast this graph with a similar workout one month earlier, using a chest strap for HR data:

With the chest strap, each of the six sprints is accompanied by an obvious spike in HR that reaches 160-170 bpm. The HR response to the sprints looks completely different than in the data from the FR235’s wrist sensor.

I knew intervals would be a problem for the FR235’s optical sensor, so I can probably excuse this. But what about easy runs at a constant effort? A HR sensor can be useful for ensuring easy runs stay truly easy, if you have a tendency of pushing them too hard. Unfortunately the FR235 frequently fails there too. At least once or twice a run, I’ll be moving at a very easy pace that I know should put my HR in the mid-130s, but I’ll see a HR number in the mid-150s. So I’ll slow down and take tiny little steps, only to see the HR number increase even further into the 160s. Finally I’ll slow to a walk, but the HR number will stay in the 160s before abruptly dropping to the 120s. What seems to be happening is that my cadence (steps per minute) is close enough to my HR (beats per minute) that the HR sensor somehow locks onto cadence instead. Here’s a recent example:

At about 28 minutes I walked for a moment, and immediately afterwards the HR measurement shot up by 20 bpm. It stayed at this artificially elevated level for 4 minutes, until I walked again. Here’s another graph from the same run, showing HR vs cadence. Garmin normally displays the two on different vertical scales, so I’ve used Photoshop to align the cadence and HR scales for a zoomed-in graph:

From 28:20 to 31:40 it’s obvious that the HR number reported by the FR235’s optical sensor is actually my cadence, not my HR. It didn’t correct itself until I walked at 32:00 (orange dots way down near 100). This happens fairly often, and the effect can last for many minutes. Grrrr.

The final problem I’ve observed with the FR235 optical HR sensor is more subtle. Sometimes I’ll increase my effort level significantly, such as for some tempo-pace miles in the middle of an easy run, but the FR235 doesn’t seem to notice that my HR has increased. Here’s an example from today:

Initially I was plodding along at a 9:15/mile pace, with a HR around 145. At 27 minutes, I increased the pace to 7:55/mile, and held it there for the next four miles. This was on a pancake-flat bike path, and the pace was nice and even, so my HR should have been roughly constant. Yet the FR235 showed an initial HR jump to the mid 150s, followed by a return to the 145 level, where it remained for a long time. At about 50 minutes it showed an abrupt HR jump of 20 bpm up to 165, even though my pace and effort hadn’t changed. The HR numbers then remained around 165 until I slowed back to an easy pace, at 58 minutes.

Based on knowledge of my HR zones from past runs, the numbers around 165 are likely correct, and the measurements from the 23 minutes before that are bogus. 23 consecutive minutes of faulty HR data, during an even-paced, even-effort run on level ground. You could fit an entire 5K race into that window. Grrrr.

Maybe I’m wearing the FR235 wrong, or using it incorrectly, leading to poor HR measurements? In the interest of science, I shaved my wrist in the area under the watch, to ensure the sensor had a clear patch of skin for measurement. Per the instructions, I wear the watch slightly further up my arm than I normally would, so it’s well away from my wrist bone and can sit flat against my skin. The strap is adjusted pretty tightly, to guarantee ambient light won’t sneak in under the watch. It’s tight enough that the watch-shaped dent in my skin is still visible 30 minutes after the watch is removed. Any tighter would be unacceptably uncomfortable.

Some reviewers recommend trying the watch on your other arm, or turning it around so it’s on the inside of your wrist. I’ve not tried these solutions, since they defeat the easy and convenient appeal of a wrist-based HR sensor. Who wants to wear their watch on the inside of their wrist? I would sooner just wear a conventional HR strap.

Fortunately it’s possible to do exactly that. The FR235 can be used with an external Garmin HR strap, like the strap from a FR230 or FR220. If present, the FR235 will use the HR data from the chest strap instead of its own optical HR sensor. This makes it possible to use a chest strap for important workouts and races where accurate HR data is crucial, while getting sort-of-accurate HR data from the wrist sensor on other runs. It’s not great, but it’s still better than wearing a chest strap every day, or not getting any HR data at all for those other runs.

Outside of running, the FR235 also measures all-day heart rate. I’ve found this data to be surprisingly interesting and useful, especially the measurements of resting heart rate. By watching how RHR changes from day to day, I can identify periods where I might be overworked and need to take an easy day to avoid overtraining. I’d never get that sort of data from a chest strap.

For now I’m living with the iffy HR data from the FR235 on most runs, even though I know it’s sometimes off by 20 or more beats per minute. For workouts where I care about getting more accurate HR data, I wear the chest strap. Meanwhile, I’m looking forward to what sensor improvements Garmin and others may bring in the future.